How I Chose My Career in Assurance & Internal Audit Consulting #MyCareerStoryMonday 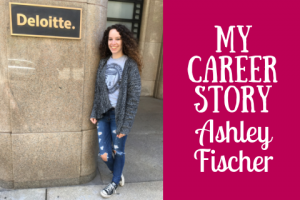 I started thinking about my Consulting career when I was in high school. I worked for Ticket Galaxy which is secondary market ticket broker, where we resold tickets to popular events including concerts, sports games, and Broadway shows. I worked as a shipping specialist which was a glorified title for one of the high school students who prepared the tickets to be shipped to the customers. I would look at the order and make sure the correct tickets were attached and then put them in an envelope to ship.

The summer after my freshman year at Bentley, I worked for RCN Capital, which sells short-term high interest loans to people who are looking to flip commercial properties. I learned a lot about quality assurance and what it takes to build an efficient and user-friendly website.  I was responsible for making sure all of the changes made to the website functioned the way they were supposed to so that the users wouldn’t run into any problems. I also did some work to automate the testing they did every time they updated the website to make sure testing the changes took less time and was more efficient.

During my sophomore year at Bentley, I began working for the recruiting office, which is where students go when they have an on-campus interview. I have been working there for a couple years now and have gotten a lot of opportunities to speak with employers and see how the #1 Career Services in the country maintains employer relations while keeping the interests of the students as a high priority. I post jobs to BentleyLink and help with a lot of the IT problems that arise throughout the course of the Career Fair preparation.

My second summer at Bentley, I was fortunate to intern for TJX in their IT department. This was my second introduction to information technology as a career path and continued to show me the different routes my major could take me. At TJX, I was responsible for creating a new SharePoint page (a Microsoft product that companies use for internal website creation and data sharing) that gave employees information about the new intern program. It allowed people to learn what the interns were doing, request an intern, and recommend an intern for hire. I also worked on a group project with other interns to evaluate TJX’s use of communication tools. We presented our results to most of IT leadership, including the CIO.

Also during my second summer at Bentley, I was fortunate to attend two leadership conferences, one with EY and one with Deloitte. I went to a Women in Technology conference for EY where they flew me out to Chicago for one night so I could learn more about their consulting practice and what some of their top female leaders had accomplished during their tenure with the firm. I also got to eat a lot of good food while checking out the city, which was one of my favorite parts! With Deloitte, I attended their Envision conference which was held in their Boston office. I learned a lot about what the Advisory practice did and networked with a lot of the people who worked in the office. I received an offer to intern for them the following summer, which I happily accepted.

My last internship, and now my career, was at Deloitte in their Advisory practice in Boston. I worked on a team that was conducting an audit for both the financial side and the IT side. I worked on the IT side to evaluate the controls the company had in place to ensure they were maintaining an ethical business that maintaining the interests of the stakeholders. During my 8 weeks, I traveled weekly to the client site and sat in on meetings in order to collect evidence for the audit. I also did a lot of testing by using the information we collected and documenting whether or not what they said in the meeting was verified by the evidence collected. I received a full-time offer to join the company after I graduate at the conclusion of the internship and I have accepted. I will be returning to Deloitte, and I am so excited!

I became interested in a consulting career when I attended the Envision conference in Boston two summers ago. I learned a lot about what it meant to be part of the Advisory practice and learned about who my potential future colleagues. I found out that there is a lot of room to grow within the firm which was something that was really important to me. I was drawn to Deloitte because they place a high emphasis on the value of the employees and making sure they invest the time and resources into them so they can provide the opportunity for everyone to grow to their fullest potential.

I find the most rewarding aspect of my position is the ability to continuously learn while on the job. Throughout my entire time during my internship, I learned something new every day and I got the impression that a lot of the full-time people did as well.

I find the most challenging aspect of my position is communicating with the client during an external audit because no one wants to be told they are doing something wrong. When doing the testing, it is possible to find that the client is not performing to the best of their ability, and they need to make changes in order to be compliant with the PCAOB (Public Company Accounting Oversight Board). I haven’t personally experienced this, but based on stories I have heard, that can be a challenging conversation to be a part of.

The most helpful advice I have for someone preparing for this career is to network with people who work there. As long as you have a professional question, it is fine to reach out to people on LinkedIn to learn more about the firm, what the person does, or ask for interview advice. Often times, the recruiting team brings people anywhere from consultants to partners to hold the interviews. If you are able to find out who is interviewing you, look them up on LinkedIn and Google to find out more about them and don’t be afraid to bring up any interesting professional facts you find out about them.

The Bentley specific resources I would recommend to someone pursuing this career are both on-campus events and courses. When you get into this type of career at the Big 4, they teach you everything you need to know on the job. Getting your degree and excelling at school proves you have the capacity to learn and retain information. The best thing you can do is get involved with the opportunities the firms offer on-campus, such as an Advisory Case Competition where you are given a real work scenario. Also, the classes an ISAC major would be required to take here at Bentley would directly apply to the work of someone in the Assurance & Internal Audit department. Additionally, I feel like my background in CS with coding and database work has given me the ability to be able to follow along in client meetings so I feel involved and can keep up with the language and technical information.

The people that were most helpful in getting me where I am today are every single person in the recruiting office. I had the opportunity to meet with a Deloitte recruiter because I work in the recruiting office, and she encouraged me to apply to the leadership conference, which led to my internship, which in turn led to me accepting a position at the firm. Without working in such a progressive and supporting office, I wouldn’t have known this type of opportunity existed for me so early in my career, and I am forever grateful to all of them for helping me and supporting me in my career.

If you’re interested in pursuing a career with Deloitte, or you’d like to learn more about the company click here. More specifically, if you are interested in their internship opportunities, here is some additional information. Also, be sure to connect with Ashley on LinkedIn if you want to learn more from her!