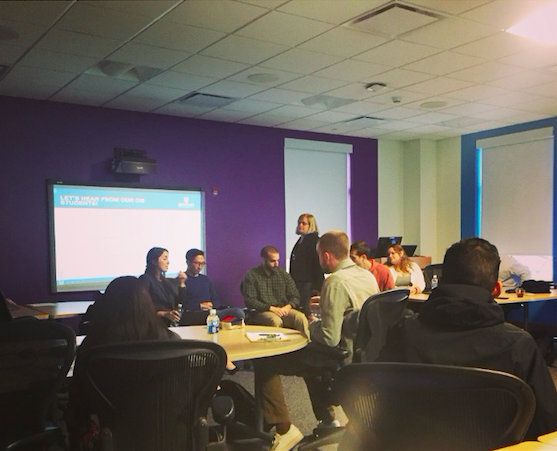 Yesterday, 10/26, Bentley students came to the CIS Studio to learn more about the career paths that a Computer Information Systems major/minor has to offer. The panel was led by Professor David Yates as well as Janet Ehl, Director of Recruiting and Employer Relations. Technology is growing at an exponential rate, creating a bigger job market for technology majors like CIS. It’s a “good time to be a CIS student,” says Janet Ehl, not only because of the huge job market for technology positions but for other reasons as well. One of which being the salaries are far above the average salaries of other majors. Professor Yates added that there are not enough CIS students to fulfill the job opportunities Bentley gets each year. Seniors also shared their path as a CIS major and the benefits that the major has had over the past few years. If you are curious about the CIS major/minor, contact Professor Yates, dyates@bentley.edu, or Janet, jehl@bentley.edu .