Four undergraduate  students in the CIS major (Olivia Corriveau, Olivia von Oldenburg, Angela Su, and Meilin Zhu) represented Bentley University and won FIRST place at the 2016 Travelers IT Case Competition on November 4, 2016! This is the first time for a Bentley team to win a prize at this. 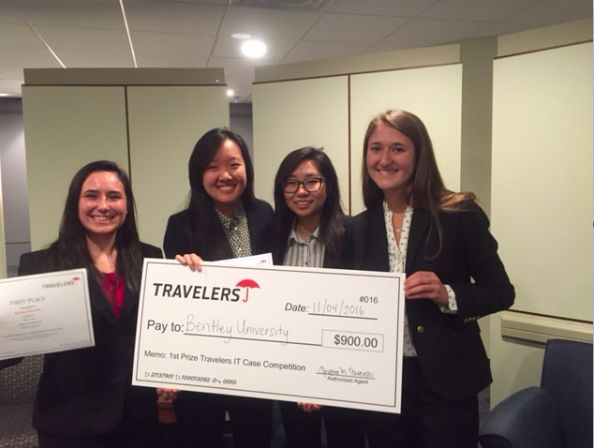 Advised by Prof. Heikki Topi and Prof. Jennifer Xu, the team worked very hard in the past three weeks after receiving the case problem. They did intensive independent research and worked out a solution that deeply impressed the four judges. One judge commented that the team presented the technology (the use of drones to enable emergency communication infrastructures) so well that he himself learned a lot from it. Another judge was impressed not only by the breadth and depth of the solution but also by the artwork the team designed.

It was a very strong competition among the participating universities. All teams were well prepared and did an excellent job.

However, our team was the best! Congratulations and thank-you to our Bentley team and Professors Topi and Xu, who supported the team throughout the case process, including Professor Xu’s trip to accompany the team to the competition.