Bentley Senior, Santiago Rada, December 2015 Economics-Finance major, took part in Credit Suisse’s recurring HOLT Community Competition. His pitch recommending the investment in the Marathon Petroleum Corporation was evaluated by the Academic Review Board and recommended for publication: http://project-firefly.com/node/19310;  Parallel to his participation in the HOLT Community Competition he entered the Credit Suisse HOLT Valuation Challenge. Through the three-stage iteration he secured his interview spot with Credit Suisse and has accepted the CO-OP position offered to him in New York! Let’s hear more about his journey!

Thank you! I found out about the competition, though a referral, after completing the Fed Challenge. One of the advisors shared with us an email from a Fed Challenge alumni, currently working at Credit Suisse, who encouraged us to participate and potentially earn internship opportunities with the firm. The first round of the challenge lasts three weeks. Each week participants  watch a video about the valuation methodology used in the HOLT platform. After each video, there is a comprehensive test. Students who score 210 points or above move on to the second stage. The HOLT valuation methodology measures the economic value that companies create after adjusting accounting distortions. Bentley provided me with a great accounting and finance knowledge, which made things easier during this stage.

2)    So you moved on from approximately 2000 competitors to 130 for second round – WOW – what type of analysis did you do and how much time did you spend on this?

Overall, there were participants from 253 universities and 46 nationalities that participated; 130 competitors made it to the second stage.

The second stage consists of a stock pitch video presentation using the concepts learned during stage one.  We had to choose a company, out of five options, to value and determine if it would outperform or underperform the market. I chose Foot Locker and valued it using the metrics and concepts learned during the first stage. The second stage took place during the summer, so I would generally work on my presentation after my internship for about an hour. It took me almost a week to gather the necessary information and two weeks to prepare and polish the script. I had a 2 1/2 minute limit, so I edited my script multiple times to make sure everything ran concisely. The video took me one day to produce.

After my video submission, I decided to participate in the Holt Community competition in order to show the review board my commitment to the HOLT community.

My video can be viewed on YouTube at: https://www.youtube.com/watch?v=nBHi5RdDvFg

22 people were awarded the HOLT Champion certification after the board reviewed the video submissions. Students are also invited to stage 3 to interview for the co-op position.

4)   When do you start your co-op and what will be you doing?

I will start the co-op in January with the HOLT team in New York. I will work as a Sector Specialist which is similar to an Equity Research position. I will be there for a six month period rotating through different groups such as their Latam, Emerging Markets and TMT teams.

Congratulations on all your hard work and success with this. Thank you Santiago for  representing Bentley so well!  Best wishes in NYC with Credit Suisse! 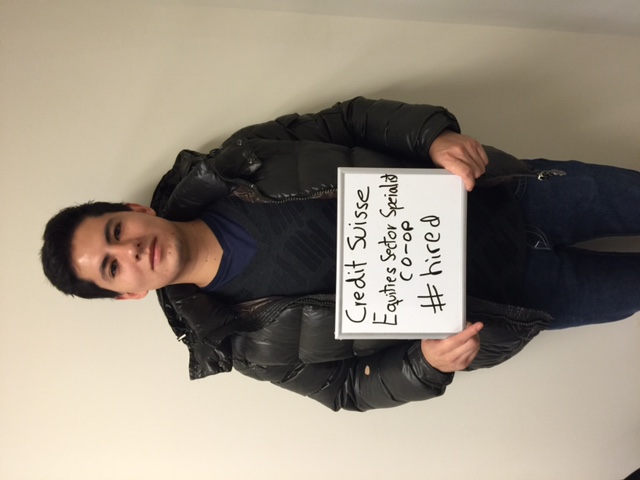