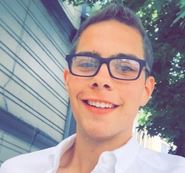 This summer, I had the opportunity to intern at Google under the Nest brand as the first-ever Nestling & NestLife Intern. My internship was within the realm of HR, specifically working on-boarding/culture programs. During the first half of my internship, I assisted in welcoming fifty Nest interns, played a role in the planning/execution of a Summer Intern Open House, and launched Nest’s first ever Global Culture Analysis. During the first week of July, my focused switched as I was asked to oversee full-time employee on-boarding and orientation. I had the chance to lead Welcome Home (Nest’s orientation program) for the next six or seven weeks. In addition to overseeing orientation, I created Nest’s first-ever brandbook for its internship program, launched a social media competition for our interns based on new product launches, and refreshed all internal resources and tools for current and future interns.
During my time at Nest, I learned more than I could’ve imagined. Each day presented new opportunities, challenges, and an immense amount of knowledge. I was surrounded by some of the best people in the world, and I am proud to say that those people went from colleagues to friends. I strove to take advantage of each day by dedicating myself to the work I loved most (luckily I was doing the type of work I love). I’m thrilled to be heading back to Nest & Google next summer!